I reluctantly left Koh Chang two days ago. Last night I stayed in the provincial Thai town of Trat. I was back in a way to civilization and removed from the slow island life. I find Koh Chang even with its current development, a place where I could easily idle away my time for a long time – beautiful beaches, cheap accomodation, delicious seafood and good facilities for working on the internet.

I found a cheap room in Trat for 100 baht for the night. I had a great pizza for dinner, watched a movie on my laptop, read and went to sleep. It wasn’t long though, before I woke up. Even though the guesthouse was on a narrow laneway, motor bikes seemed to go up and down it all night. The room was on the second floor which had wooden floor boards. Everytime someone walked across the floorboards, it sounded like someone was in my room.

After spending cool nights down at the beach for the past two weeks, I felt so hot even with a fan on all night. It’s strange, but when it became light, I suddenly felt so sleepy. I had breakfast watching CNN and realized it was Good Friday. Not that it means too much to me, but I thought I should try and call home over Easter the weekend.

I found the bus station and got a bus to Ban Hat Lek on the border of Thailand and Cambodia. I realized it was the first time I had ever crossed a land border between two countries. Guys were hanging around ready to take people into town. A young guy took me on the back of his motorbike for the 15 kilometer ride into the town of Koh Kong, after passing through immigration and getting my visa.

I had heard stories of Cambodian immigration asking for ‘extra money’ for the visa. The visa cost 1200 baht. I had read that it costs 1100 baht, so I don’t know if that was the extra money they sometimes charged people or if prices had gone up.

The motorbike guy took me to a guesthouse, I knew he was going to make money off the deal, but he had been helpful enough, it was hot and I just wanted to eat something.

At the guesthouse, I ordered my first Cambodian meal: the first item on the menu – vegetables and noodle soup. Something like Japanese or Vietnamese noodles, I imagined, but it was more like instant noodles with a bit of potato and carrot. At least the Angkor beer tasted good.

Even though everyone accepts Thai baht, I wanted to get some Cambodian Riel. I changed US$20 and got 81,000 Riel in 5,000 riel notes. You feel pretty rich with a wallet full of notes. No wonder they prefer baht here I thought. I had a walk around Koh Kong, but was soon exhausted from the dry heat and an afternoon sleep seemed in order.

Koh Kong is the ‘tourist hub-in-waiting’ according to the Koh Kong advertiser, a free English pamphlet on the town, where ‘visitors can travel safely all around the entire province with more chances of winning the lottery, than standing on a landmine’. 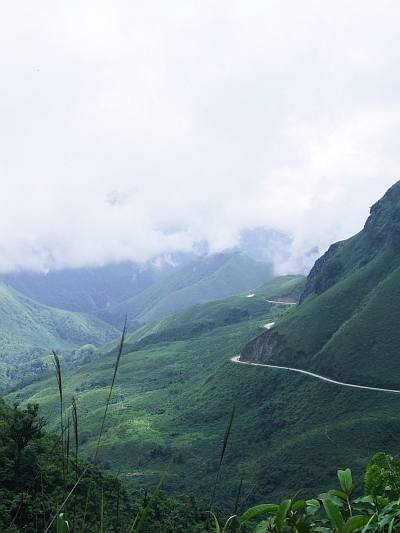